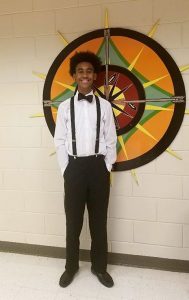 Laurence Hill is a diamond in the rough. He is athletically gifted and has helped his football team do something that’s never been done. His team won the state championship two years in a row.

He not only excels athletically, but academically. Laurence has the highest GPA on his football team at Warner Robins Middle. He set a personal goal to never have a B and he has maintained that goal thus far with an A average.

Laurence has come out of his shell at church and is very involved with the youth step team. His future goals are to attend the University of Alabama and major in sports medicine.