We All Carry a Father’s Love In Our Hearts

When Luther Vandross Jr’s song, “Dance with My Father,” written in conjunction with Richard Marx, was released, it was March 2003 (album in June). In April, Luther would have a stroke and be in a coma for two months. The song was on Luther’s 13th studio album, his last, and it went double Platinum (sales of 2 million or more). The song won two Grammy’s, “Song of the Year” and “Best Male R&B Vocal Performance.” The song, according to Vandross himself, was his “career song,” and was deeply personal to him. His father, Luther Vandross Sr., passed away when Luther was 7 years old from complications of diabetes. His mother, Mary Ida, said she was surprised Luther remembered so much about his father because he was so young when he died. Seems Luther’s singing talents were inherited, his father who used to sing around the house. “Dance with My Father” is ultimately a sad song; a song of longing and grief, but it’s also a song about how much a father means to a properly functioning household, and how much his children observe, listen and emulate him. 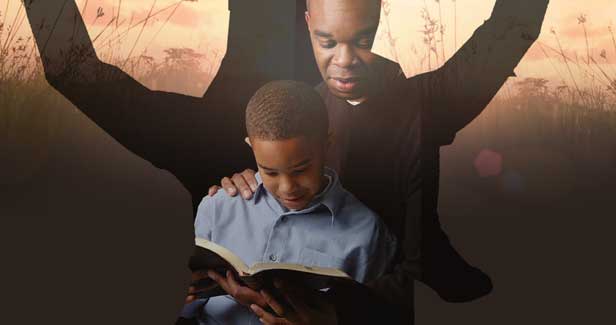 Dance with My Father Again
— Luther Vandross and Richard Marx

The Bible speaks about fathers in several verses, but the one that sets fathers apart is 2 Corinthians 6:18: “And I will be a father to you, and you shall be sons and daughters to me, says the Lord Almighty.” Yes, God considers himself, our father. The Lord’s Prayer begins, “Our Father who art in heaven.” So, we look to the Bible, God’s Holy Word, for instructions about how to be good fathers. In Psalms 32: 7-8, fathers are protectors. In Proverbs 4:11-12 fathers are supposed to guide their children in the “way of wisdom and “lead them in upright paths…”

In 2 Samuel 7:14-15, God again teaches us how to be good fathers by following his example, “I will be a father to him, and he’ll be a son to me. When he does wrong, I’ll discipline him in the usual ways, the pitfalls and obstacles of this mortal life. But I’ll never remove my gracious love from him.”

Fathers can, at times, look at the love and devotion children give their mothers on Mother’s Day and wonder, “What about me?” But the Lord describes the best gift a father could ever receive in Proverbs 23:24, “The father of a righteous child has great joy; a man who fathers a wise son rejoices in him.”
The best gift this father has ever received didn’t come in the form of a new tie or wallet, it was the simple words, “I Love You, Dad.” To all our FBBC fathers in Christ, happy Father’s Day. And remember, children, you don’t have to wait until June 20 to utter those simple words and show your fathers some love. And for those children whose fathers have gone to be with the Lord, like Luther’s dad when he penned “Dance with My Father,” we will see them again if they died in Christ. Two years after “Dance with My Father,” was released, Luther would join him, felled by a heart attack and complications of diabetes and high blood pressure. He was 54.