Voter Suppression is Nothing New in Georgia 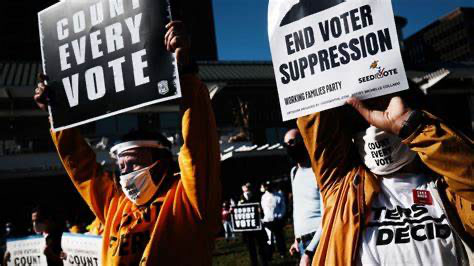 “You can’t handle the truth.”

Aside from the COVID-19 pandemic, 2020 will be remembered as the year Georgia’s sleeping giants arose from slumber and headed to the ballot box in the November 3 election for president of the United States. Democrat Joe Biden became the first Democrat to win the state’s 16 Electoral College votes since Bill Clinton in 1992. And those giants returned to the polls on January 5, 2021, sending two Democrats, Rev. Raphael Warnock and Jon Ossoff, to the Senate — thus giving control of the senior body to Democrats.
How have the state’s Republicans responded? They waged an all-out war to suppress the vote by proposing measures that would change the very laws they wrote and approved.

Since the 2020 and 2021 election results, Republicans in the Georgia General Assembly have fallen all over themselves to pass new voter suppression laws which will impact minority communities. Some of the 20 proposed laws would limit early voting, specifically on Sunday, to stunt the “Souls to the Polls” efforts by African American churches. They sought to eliminate ballot drop boxes, outlaw mass mailing of absentee ballot requests by third parties and require absentee voters to send a state-approved ID when requesting a ballot, and again when returning the ballot, a clear risk for identity theft. Republicans would also shorten the time window for requesting absentee ballots and restrict donations to local election officials from nonprofits to support voter efforts, putting more stress on local taxpayers. In Fulton County, those donations funded extra precincts and personnel.

Georgia became the first state in the nation to enact the “Anti-Democracy Bill of 2021.” Republicans call it the “Voter Integrity Bill of 2021,” but it is anything but. The bill allows the Legislature to intervene in a manner former President Donald Trump wanted, after losing the election, to overturn the results.

We should not be surprised. Though the Georgia Colony was founded as a free colony, the only one of the 13 colonies to do so, in 1751 slavery was allowed. It was not until the passage of the 15th Amendment in early 1870, 119 years later, that black men were allowed to vote. The amendment said: “The right of citizens of the United States to vote shall not be denied or abridged by the United States or by any State on account of race, color, or previous condition of servitude.” Women didn’t get the right to vote until 1920 after the 19th Amendment was approved. But let’s take a step back. Almost immediately after the 15th Amendment went into effect, Georgia, in 1877 implemented a poll tax — and during the dawn of the 20th century — launched a campaign to disfranchise all blacks by employing literacy tests that didn’t apply to illiterate whites.

One hundred years after the end of the Civil War, the Voting Rights Act of 1965 put teeth behind the 15th Amendment and The Civil Rights Acts of 1957, 1960, and 1964. The federal teeth were in Section 5 of the Voting Rights Act which required mostly southern states to seek pre-clearance from the federal government if they wanted to change anything related to voting.

It was Republicans who pushed through the Photo ID law in 2006 in Georgia. The clear intent of the law was exposed when the GOP didn’t require Photo ID for absentee ballots. Why? Because few people of color voted absentee, rather, Republicans were fine with disenfranchising more than 800,000 Georgians who didn’t have a drivers license or state ID.

Included in that law was a fee for a state ID. Democrats went to court and won. The state had to employ mobile licensing bureaus because, for many voters, there were no licensing bureau in their areas, and the state had to also drop its fee for the ID because it was ruled an unconstitutional poll tax. Aside from those changes, however, the ID requirement to vote remained.

This year’s voter suppression efforts are not being sugar-coated, and it’s not just Georgia. There were 253 bills filed as of Feb. 19, 2021 with provisions that restrict voting access in 43 states, according to the Brennan Center for Justice. Republicans are basing their efforts on the “Big Lie” perpetrated by former President Trump.

Republicans are blinded by their shocking defeats in 2020 and 2021 and they have failed to recognize the root cause of their discontent and would rather not look in the mirror. Their losses didn’t come about because of turnout by people of color, although that was a big factor. Republicans should look to suburban women and others who were turned off by the GOP, particularly the antics of former President Donald Trump. If Republicans continue down this path of voter suppression — as they are sure to do — they risk disenfranchising their own voters and Independents. And they invite federal intervention that is already occurring. The House has passed the For the People Act, HR 1 and it is waiting for Senate approval. HR 1 would undo all the chicanery at the state level.

Republicans also risk finding themselves in the crosshairs of an upset electorate in the upcoming 2022 elections — all because they couldn’t handle the truth. The sleeping goliaths are awake and won’t slumber again.