Two Trailblazers Made Their Historic Marks in September

Long before Venus and Serena Williams came to dominate the tennis courts at the U.S. Open, Wimbledon and other Grand Slam locations, there were Althea Gibson and Arthur Ashe Jr.

Fifty years ago, 12 years before Venus was born and 14 years before Serena, Ashe was playing in the very first U.S. Open Tennis Championship. The tournament was previously titled the U.S. National Championship and was limited to amateurs when Gibson first won there in 1957. This new Grand Slam event combined professionals and amateurs.

It was at this U.S. Open Inaugural tournament where Ashe won his first Grand Slam in the men’s singles besting Tom Okker of the Netherlands in five sets, 14-12, 5-7, 6-3, 3-6, 6-3. However, Okker received the $14,000 prize for the highest finish for a professional. This wasn’t an example of racism rearing its ugly head. Believe it not there was a time of amateurism in this country. To maintain amateur status athletes couldn’t be paid. Ashe was an amateur as well as a lieutenant in the U.S. Army and could not accept the prize money.

But who was Arthur Ashe Jr., and what made him great? So many times we hear of children raised by single parents who grow up to accomplish great things. Ashe fits that category, but Ashe was raised by his father, Arthur Ashe Sr. His mother Mattie, died at 27 years of age due to complications during pregnancy.

Ashe was forbidden from playing football, but there were four tennis courts in the blacks-only playground in Richmond, Virginia where he lived. Ashe started swinging a tennis racket when he was 7-years-old and came to the attention of Ron Charity, a Virginia Union student and the best black tennis player in Richmond.

Charity introduced Ashe to Robert Walter Johnson, a physician — and Althea Gibson’s coach. Gibson was the first person of color to win a Grand Slam title (the French Championships, 1956, Wimbledon and the U.S. Nationals, 1957) Gibson won both tournaments again in 1958 — 50 years ago this month for the U.S. Nationals, now the U.S. Open. 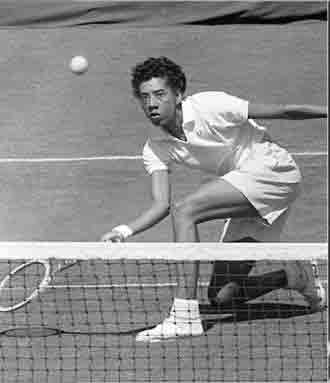 In the early 1960s she also became the first black player to compete on the women’s professional golf tour even though many tour sites refused to let her play and some that did let her play didn’t allow her to use their clubhouses to dress because she was black, so she dressed in her car.

Arthur Ashe’s legacy is secure as is Gibson’s. Though he died in 1993 at the age of 49 from complications of HIV, (believed to have been contracted during heart bypass surgery from a blood transfusion), Ashe never shied away from his fate. During a period when the malady carried the weight of social stigma and much was unknown about HIV, Ashe publicly announced his illness and founded the Arthur Ashe Foundation for the Defeat of AIDS and the Arthur Ashe Institute for Urban Health before his death.

Gibson also had health issues. In the late 1980s she suffered two cerebral hemorrhages and in 1992 she had a stroke. In 2003 she survived a heart attack, but died on September 28, 2003, at the age of 76, from complications following respiratory and bladder infections.

Along with other honors, Ashe was posthumously awarded the Presidential Medal of Freedom by President Bill Clinton; the Arthur Ashe for Courage Award, one of the honors given during the ESPY Awards— and in the USTA Billie Jean King National Tennis Center in Flushing Meadows, New York — there now stands Arthur Ashe Stadium. It is the main stadium of the U.S. Open tennis tournament and is the largest tennis stadium in the world (by capacity) that can seat 23,771 tennis fans. It is the site of the men’s and women’s U.S. Open finals the first weekend in September, which will be held September 8-9, 2018.