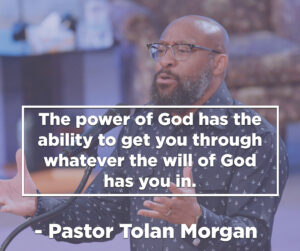 He may not come when you want Him, but He’s always on time. If you are familiar with the old church, you’ve heard that saying thousands of times. And like me, you’ve lived long enough to finally know what it means. God does not operate based upon our time. He has His own timeline and we have to trust Him and trust that He is doing what is best. Pastor Morgan (PTM) explained this principle a few weeks ago by using the story of Lazarus being raised from the grave.

On his arrival, Jesus found that Lazarus had already been in the tomb for four days. Now Bethany was less than two miles from Jerusalem, and many Jews had come to Martha and Mary to comfort them in the loss of their brother. When Martha heard that Jesus was coming, she went out to meet him, but Mary stayed at home. “Lord,” Martha said to Jesus, “if you had been here, my brother would not have died. But I know that even now God will give you whatever you ask.” John 11:17-22

The text makes it clear. There is a little attitude in the way Martha addressed Jesus. And not only her address to Jesus stands out, but she chose to go out and meet him, rather than wait until He came to her. Pastor Morgan gave us the key to what’s going on. Martha and Mary were operating on their time. Jesus was operating on eternity. (PTM) Martha and Mary wanted life restored to that which would ultimately die again. Jesus was there to prove He had the power to provide eternal life. Jesus said to her, “I am the resurrection and the life. The one who believes in me will live, even though they die; and whoever lives by believing in me will never die. Do you believe this?” John 11:25-26 NIV

But the sisters are not the only ones God placed in a situation that required faith to trust God and His timing. Hebrews Chapter 11 provides us with a large cloud of witnesses who exercised enough faith in God to trust His timeline. Abel, Enoch, Noah, Abraham, and Sarah died without receiving the promises. They all died in faith without having received the promises, but they saw them from a distance, greeted them, and confessed that they were foreigners and temporary residents on the earth. Heb 11:13 HCSB. Wow!!! I want you to think about the fact that God promised Abraham he would be the father of many nations and He/God has made that promise a reality. Now think about the fact that Abraham and Sarah put their faith and trust in God even though they did not see that promise fulfilled in their lifetime. They did not live long enough to see what you and I now see – people of all nations called by His name.

The list of those who put their trust in God’s Timeline is even longer. The writer of Hebrews put it this way:

“And what more can I say? Time is too short for me to tell about Gideon, Barak, Samson, Jephthah, David, Samuel, and the prophets, who by faith conquered kingdoms, administered justice, obtained promises, shut the mouths of lions, quenched the raging of fire, escaped the edge of the sword, gained strength after being weak, became mighty in battle, and put foreign armies to flight. Women received their dead—they were raised to life again. Some men were tortured, not accepting release, so that they might gain a better resurrection, and others experienced mockings and scourgings, as well as bonds and imprisonment. They were stoned, they were sawed in two, they died by the sword, they wandered about in sheepskins, in goatskins, destitute, afflicted, and mistreated. The world was not worthy of them. They wandered in deserts and on mountains, hiding in caves and holes in the ground.

All these were approved through their faith, but they did not receive what was promised, since God had provided something better for us, so that they would not be made perfect without us.” Heb 11:32-40 HCSB

You and I have the benefit of hindsight. We can look backward in time at this large crowd of witnesses and see how God’s promises to them were fulfilled on His Timeline. But a couple questions still remain to be answered. How do I, in August of 2020, deal with the life altering effects of the pandemic combined with the desire for social change? How do I remain faithful in whatever situation God has placed me in and still trust His Timeline? Pastor Morgan provided the answer.
The power of God has the ability to get you through whatever the will of God has you in. (PTM) He may not come when you want Him, but He’s always on time.