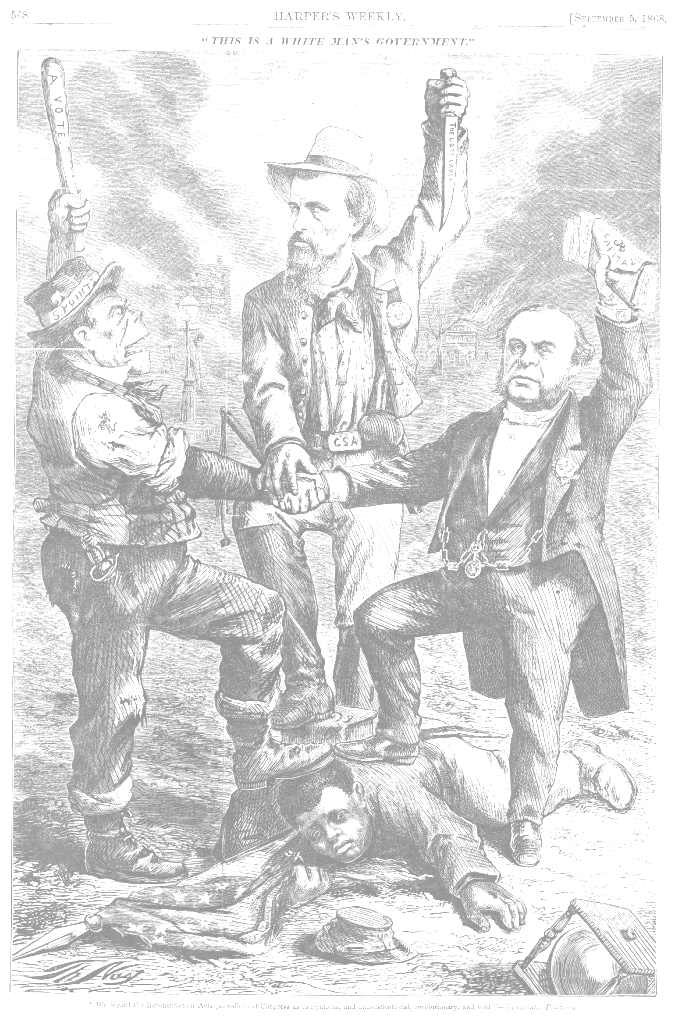 And while government shutdowns have been the used as a political tool in modern times, it was first used as a cudgel in 1879 — and though most history books didn’t record it as a government shutdown, rather an “Appropriations Fight” or “Rider Fight” — it was — nevertheless — one branch of government trying to force another branch to do something it did not want to do by using the power of the purse.

It might not surprise anyone to know that this first appropriations fight, in 1879, involved African Americans. Rutherford B. Hayes was the nation’s 19th president. Hayes was a Republican — and Republicans were the party of Abraham Lincoln and anti-slavery. It was Democrats who were pro-slavery and segregationist.

When the Southern States seceded from the Union, the first being South Carolina on Dec. 20, 1860, all the southerners in Congress surrendered their seats and went to fight for the Confederacy, but by 1879, 14 years after the end of the Civil War. Those very same traitorous Democrats were back in Washington and they finally took control of Congress.

The scene was very different from before the war. Black men could now vote. Mississippi elected two black U.S. Senators, Hiram Rhodes Revels and Blanche Bruce. Between 1870 and 1883, 15 blacks were elected to the U.S. House of Representatives, all Republican. Jefferson Long, a successful businessman from Macon, was one of them. Blacks were elected to 85 state offices in 12 states and the District of Columbia.

But an anti-Reconstruction wave was sweeping over Georgia and the rest of the South. When Democrats gained control of Congress there were a couple of things they wanted to set straight. They didn’t want blacks voting. And they didn’t want federal troops coming into the South to protect blacks’ right to vote. In other words they were willing to rob blacks of their vote by any means necessary — including violence. So what did they do?
These Democrats basically said to the president, “We’ll fund the rest of the government, but unless Mr. President, you agree to stop sending federal troops to protect voter rights, we’ll not fund the Army.”
President Hayes didn’t give in, but the standoff went on for months. Hayes vetoed bill after bill Democrats sent to his desk that stripped protection from black voters. Eventually, the Democrats gave up and using a government shutdown as a political tactic disappeared for almost 100 years.

But that’s just the beginning of this trip down history’s lane. And, as you know, federal troops did leave the South and that set off one of the greatest migrations in world history. According to Isabel Wilkerson’s “The Warmth of Other Suns,” the Great Migration makes the California Gold Rush of the 1850s, with its 100,000 participants, and the Dust Bowl migration of some 300,000 people from Oklahoma and Arkansas to California in the 1930s, seem miniscule. More than six million blacks left the South. When the migration started during World War I, only 10 percent of the nation’s black population lived outside of the South — by its end — sometime in the 1970s — that figure would be 47 percent.

~Why Blacks Left The South~

Whatever you remember about the Jim Crow era and later, it was much worse. According to the 1933 book “The Tragedy of Lynching,” across the South, a black person was hanged or burned alive every four days from 1889 to 1929. The Equal Justice initiative identified 4,400 lynchings of black people between 1877 and 1950.

In 1938, during one of the longest filibusters in the history of the United States Senate over a bill that would have made lynching a federal crime was led by a proud Klansman, Sen. Theodore Bilbo, from Mississippi. He spoke in defense of the right to kill black citizens as white southerners saw fit.

“If you succeed in the passage of this bill,” Bilbo said, “you will open the floodgates of hell in the South. Raping, mobbing, lynching, race riots, and crime will be increased a thousand fold; and upon your garments and the garments of those who are responsible for the passage of the measure will be the blood of the raped and outraged daughters of Dixie, as well as the blood of the perpetrators of these crimes that the red-blooded Anglo-Saxon white Southern men will not tolerate.”

Since 1918, Congress tried, but failed, to pass anti-lynching legislation roughly 200 times. Seven presidents petitioned Congress to end lynching between 1890 and 1952, but Congress didn’t pass an anti-lynching law until 2018.