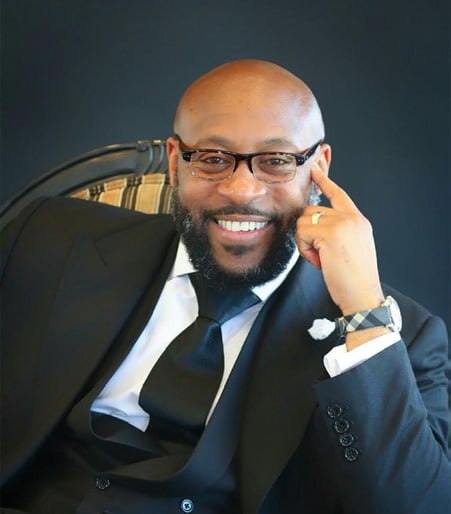 Six years ago, Tolan J. Morgan was sitting in Detroit, Michigan, minding his own business. He was pastor of New St. Paul Missionary Baptist Church. Detroit, often times called Motor City; home of the “Big Three” — General Motors, Ford and Chrysler — and the home of Berry Gordy, Motown, Aretha Franklin and so many other hit makers.

The church — located just three blocks from East 8 Mile Road — made more famous by Eminem — occupied eight acres of land where a 1,000-seat sanctuary, school, activity center and administrative building sat. Morgan had been serving as pastor there since 2001, and New St. Paul was continuing to grow. It seemed God was in his heaven and all was right with the world. But there was a stirring in Morgan’s spirit. “I wasn’t always sure that my first stop (New St. Paul) was my last stop,” Morgan said. “But I wasn’t shopping to move. I was settled there. I was happy there. But I never really felt like it was my final stop.”

Pastor Morgan was approached by one of the Pulpit Committee members, Deacon Roy Thomie on behalf of the church, to apply for the pastor’s position, but the prospect didn’t attract him. Thomie asked Morgan to at least visit FBBC’s website and take a look at the church, but Morgan wouldn’t do it. “I told him no. I was not interested in any kind of way,” Morgan said.

Three months later their paths would cross again. Morgan was preaching at the Berean Christian Church in Stone Mountain, Georgia in October 2014. In attendance was Thomie and his wife Rosemary. The next day, Morgan gets a call from Thomie. After some small talk, Thomie says, “Now I know why we don’t have a pastor.” Morgan replied in surprise, “You still don’t have a pastor? Why don’t you have a pastor, I talked to you three months ago?” Thomie answered, “Because you’re our pastor.” Thomie then asked Morgan if he had taken a look at the church? Morgan said “no.”

But God was working on Pastor Morgan. “I finally submitted to the will of God and looked on the website.” Of course, the Dome is impressive, but the scope of Fellowship had not yet hit him. That would come when Pastor Morgan arrived for his interview, one of three pastors the committee had selected for a closer look. When Morgan was given a tour of the grounds and facilities, he recalled thinking, “Oh, OK, this is The Fellowship Bible Baptist Church!”
“The first interview with the pastoral team,” Pastor Morgan recalled, “was captivating. It was impressive. It was professional. It was orderly and it was efficient. I was very impressed and blessed by how that process was executed.”

Fellowship had been without a pastor since May 4, 2012 when founding Pastor Willie L. Reid Sr., went home to be with the Lord. When the Pulpit Committee opened its nationwide search, it received 196 applications from 26 states and two foreign countries. Pastor Morgan wasn’t in that stack because he didn’t apply. God didn’t see any of the 196 applicants as the next leader of Fellowship and the search process continued. Pastor Morgan was in the second search which drew another 86 applications — none duplicated from the first search.

Pastor Morgan was eventually selected as FBBC’s second pastor, but in the background, there waited a number of important questions he had to consider before accepting. “It was a critical time in my life given the fact that I was still dealing with the death of my father. Weighing heavy on my heart was my mother. Was she going to be alright? I’m my mother’s only child, so having to deal with the thought of God taking her husband and moving her son, all within a 12-month period, that was my concern.”

And there were certainly other considerations. Morgan is a native of Detroit as is First Lady Laneen. Both are the only children of their mothers, and Detroit was also the only home their three children had ever known, but God had already worked that out. When Pastor Morgan broached the subject with Laneen he received his first confirmation that he had heard God’s calling correctly. “She said to me, the Lord had already dealt with her about this. When are we leaving?” Morgan credits his wife for being spiritually in-tune to how God was shifting and moving them as a family.

The rest, as they say, is history. Pastor Morgan was called to lead FBBC into a new era in February 2015, and he has no plans of going anywhere. “I am fully resolved that where I am, is where God is going to pick me up from. I obviously want to grow. I want to be able to continue to take care of my family, put my children through college and see them become productive citizens and Christians in the world. I obviously want to do all that God will empower me to do to lead this church in a progressive kind of way and continue to do ministry. If I can get those things done, that’s the only scope of horizon that I really foresee. I don’t have another aspiration. This was a total work of God. I think I would do him a disservice if I had another aspiration. We owe God to be faithful where he puts us, and not to manipulate it or use it as a means for something else. I owe God that — and I owe God’s people that. Just be faithful, be grounded, be sincere and love the people of God sincerely.