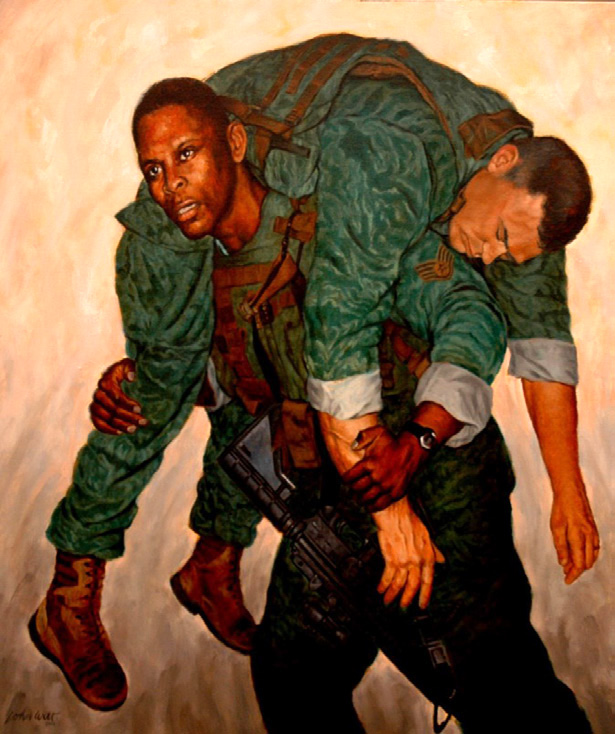 “He Ain’t Heavy” by John Witt of the Society of Illustrators. The painting is part of the USAF Expeditionary Center Art Collection (Courtesy Photo)

“And the LORD said unto, Cain, Where [is] Abel thy brother? And he said, I know not: [Am] I my brother’s keep-er?” (Genesis 4:9, King James Version)
Yes Cain, we are our brother’s keeper. Socially, politically, economically, and of course spiritually. If our brother has fallen on hard times we are posed with Cain’s question each time we face the man in the mirror. Many of us may do as Cain did – sidestep the issue rather than stepping up to it. All praises to God however, some have decided to lead the way and share our brother’s burden.
In 1884, James Wells, Moderator of the United Free Church of Scotland, in his book The Parables of Jesus tells the story of a little girl carrying a big baby boy. Seeing her struggling, someone asked if she wasn’t tired. With surprise she replied, “No, he’s not heavy; he’s my brother.” (wikipedia.org) Years later that story served as inspiration for The Hollies classic song, “He Ain’t Heavy.”
“He ain’t heavy – he’s my brother!” Dr. Martin L. King, Jr., Baptist Minister/Civil Rights Activist.

April 16, 1963 while confined in a Birmingham jail and being criticized as an “outsider” Dr. King penned these words:
“I am in Birmingham because injustice is here … I am cognizant of the interrelatedness of all communities and states. I cannot sit idly by in Atlanta and not be concerned about what happens in Birmingham. Injustice anywhere is a threat to justice every-where. We are caught in an inescapa-ble network of mutuality, tied in a single garment of destiny. Whatever affects one directly affects all indirect-ly. Never again can we afford to live with the narrow, provincial “outside agitator” idea. Anyone who lives inside the United States can never be consid-ered an outsider…” Letter From A Birmingham Jail, Dr. Martin L. King Jr.

“He ain’t heavy – he’s my brother!” The silent protest of Colin Kaepernick, NFL football player.
Kaepernick began sitting during the national anthem during the 2016 pre-season. A silent protest to show support for people of color who are being oppressed in the United States, and to take a stand against police brutality. It’s an effort to use his voice and his position as a NFL player to effect change for the people who are suffering, and don’t have the same ability to create significant change.

“I am not going to stand up to show pride in a flag for a country that oppresses black people and people of color,” Kaepernick said, via NFL.com. “To me, this is bigger than football and it would be selfish on my part to look the other way. There are bodies in the street and people getting paid leave and getting away with murder.” A timeline of Colin Kaepernick’s national anthem protest and the athletes who joined him, by Mark Sandritter.

At the midway point of the 2017 NFL season, Kaepernick is still an unsigned free agent. Many believe his unsigned status is due to his protest rather than his talent. Recent events have escalat-ed the situation and may have signaled the end of his NFL career.

The little girl in Moderator Well’s story, Dr. King, and Colin Kaepernick are just three from the list of many who possessed the love necessary to interrupt their life in order to come to the aide of others whose life had been interrupted. But the greatest example of this type of love was given to us by the Son of Man. “Greater love hath no man than this, that a man lay down his life for his friends.” (John 15:13, KJV)

Over two thousand years ago, the Son of Man interrupted his heavenly exist-ence in order to intervene in the life of man. An intervention that placed him under mankind’s earthly burdens. Yet he sinned not. “For we have not an high priest which cannot be touched with the feeling of our infirmities; but was in all points tempted like as we are, yet without sin.” (Hebrews 4:15, KJV)

He willingly laid down His life for the condemned. “There is therefore now no condemnation to them which are in Christ Jesus, who walk not after the flesh, but after the Spirit.” (Romans, 8:1 KJV)

He left His heavenly abode and paid the price with His blood to make the unjustified, justified. “Much more then, being now justified by his blood, we shall be saved from wrath through him.” (Romans 5:9, KJV)

His earthly ministry concluded, He now sits at the right hand of the Father still interceding for the breth-ren. “Who is he that condemneth? It is Christ who died, yea rather, who is risen again, who is even at the right hand of God, who also maketh inter-cession for us.” (Romans 8:34, KJV)

His legacy continues each time we obey the voice of Scripture. “Go ye therefore, and teach all nations, baptizing them in the name of the Father, and of the Son, and of the Holy Ghost: Teaching them to observe all things whatsoever I have commanded you: and, lo, I am with you always, even unto the end of the world. Amen.” (Matthew 28:19-20, KJV)
Yes Cain, we are our brother’s keeper. “He ain’t heavy – he’s my brother!”