It’s A He Died Meeting 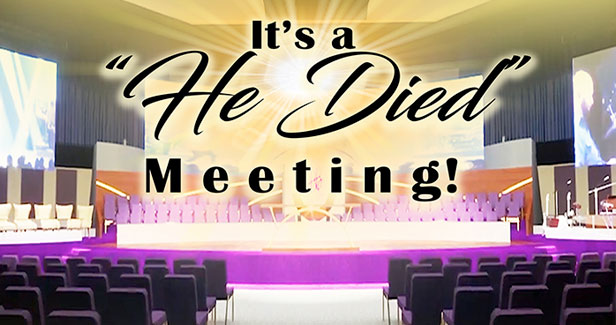 In 1939, Martin Goodman founded a company he called “Timely Comics.” In 1947 the name was changed to Magazine Management and is now known as Marvel Comics. If you are a comic book fan or movie buff, you’re familiar with the company’s list of superheroes such as, Spider Man, Iron Man, Wonder Woman, Captain America, Thor, the Hulk, Ant Man, Wolverine and my favorite, Black Panther. In every episode the superhero is challenged but comes through in the end. But Marvel Studios changed the normal ending in 2018 with the movie, “Avengers: Infinity War.” They brought together an army of our most favorite superheroes to fight the super villain of all villains, Thanos. The movie’s ending left me sad and a bit depressed because many of the superheroes, Spider Man, Vision, Doctor Strange, and my favorite – Black Panther – died at the end. Even Nick Furry, the leader of Shield, played by Samuel L. Jackson, dies in the end. I didn’t see that coming either. Everyone knows that the superhero never dies and always wins in the end – except in Avengers: Infinity War.
Throughout the year and especially on Easter Sunday, Christians around the world celebrate the death and then resurrection of our Savior, Jesus Christ. I will not diminish His work on the cross by calling Him a superhero. You see, superheroes don’t plan to die. Their superhuman abilities only work if they are alive. Our Savior was born to die. His death and ultimate resurrection didn’t leave the world helpless to a most powerful enemy – it freed us from the enemy. The Father’s plan to save the world included the death of His Son.

For God so loved the world, that he gave his only begotten Son, that whosoever believeth in him should not perish, but have everlasting life. John 3:16 KJV.

Before His death Jesus instructed the apostles and those who would later believe to remember His death.
Now when the hour came, Jesus took his place at the table and the apostles joined him. And he said to them, “I have earnestly desired to eat this Passover with you before I suffer. For I tell you, I will not eat it again until it is fulfilled in the kingdom of God.” Then he took a cup, and after giving thanks he said, “Take this and divide it among yourselves. For I tell you that from now on I will not drink of the fruit of the vine until the kingdom of God comes.” Then he took bread, and after giving thanks he broke it and gave it to them, saying, “This is my body which is given for you. Do this in remembrance of me.” And in the same way he took the cup after they had eaten, saying, “This cup that is poured out for you is the new covenant in my blood. Luke 22:14-20 KJV.

The apostles and those who stood at the foot of the cross did not see the crucifixion of Christ coming. After all, who is going to believe in and put their hope in a Savior who could not save Himself? We are fortunate to live in a time of Church history where the mystery of the Cross is revealed. His death was the price that had to be paid to redeem us from the enemy of sin.

Scripture tells us three days later, he rose from the dead and was seen by many over the next forty days. And on day forty while the apostles watched, He was taken up into heaven shielded by a cloud. (Acts 1:9-12) He now sits at the right of The Father interceding for all believers.
And just as He commanded, we remember Him by taking communion and continuing our “He Died Meetings.” Oh by the way, the best is yet to come.

Even at the end of time as we know it, God Delivers Justice in HIS Timing.