Have You Ever Wondered Why They Serve?

Friday, November 11, is Veterans Day, a holiday this country has celebrated since 1938 (Armistice Day, changed to Veterans Day in 1954). Fellowship Bible Baptist Church is full of men and women who have served our country. It’s difficult duty. Our veterans love this country, even though they may have asked the same question Doc Rivers, then head coach of the NBA’s LA Clippers, asked in 2020, “It’s amazing why we keep loving this country, and this country does not love us back.”

What did Rivers mean? Blacks have fought in every war this country has undertaken only to be denied basic human rights. Between 5,000 and 8,000 black soldiers fought during the Revolutionary War on the American side. Crispus Attucks, a black man, is thought to be that war’s first casualty.

By the end of the Civil War, roughly 179,000 black men (10 percent of the Union Army) served as soldiers and another 19,000 served in the Navy. One of those soldiers was Harriet Tubman. In 1863 Tubman led 150 soldiers on three federal gunboats up South Carolina’s Combahee River for a surprise attack on the plantations of prominent secessionists. Tubman was the first and only woman to lead a military expedition during the Civil War. What did those brave men and women get in return? A brief moment of sanity during the Reconstruction era followed by more repression.

About 380,000 blacks served in the Army during WWI. One of those soldiers was Wilbur Little. When he returned home from the war to Blakely, Georgia he was told by white men there to take off his uniform. He refused and was lynched.

Though you would hardly notice by viewing the newsreels of the day, more than 2.5 million African American men, according to the U.S. Army “registered for the draft, and African American women, also volunteered in large numbers. When combined with black women enlisted into the Women’s Army Corps, more than one million African Americans served the Army during the war.”
The armed forces of this country were segregated until 1948, and the 92nd Infantry Division was the only African American infantry division to participate in European combat during World War II. Other Black personnel were assigned to support units. What rewards did African Americans gain because of their service and sacrifice? Nazi POWs had more rights on military bases than black soldiers. 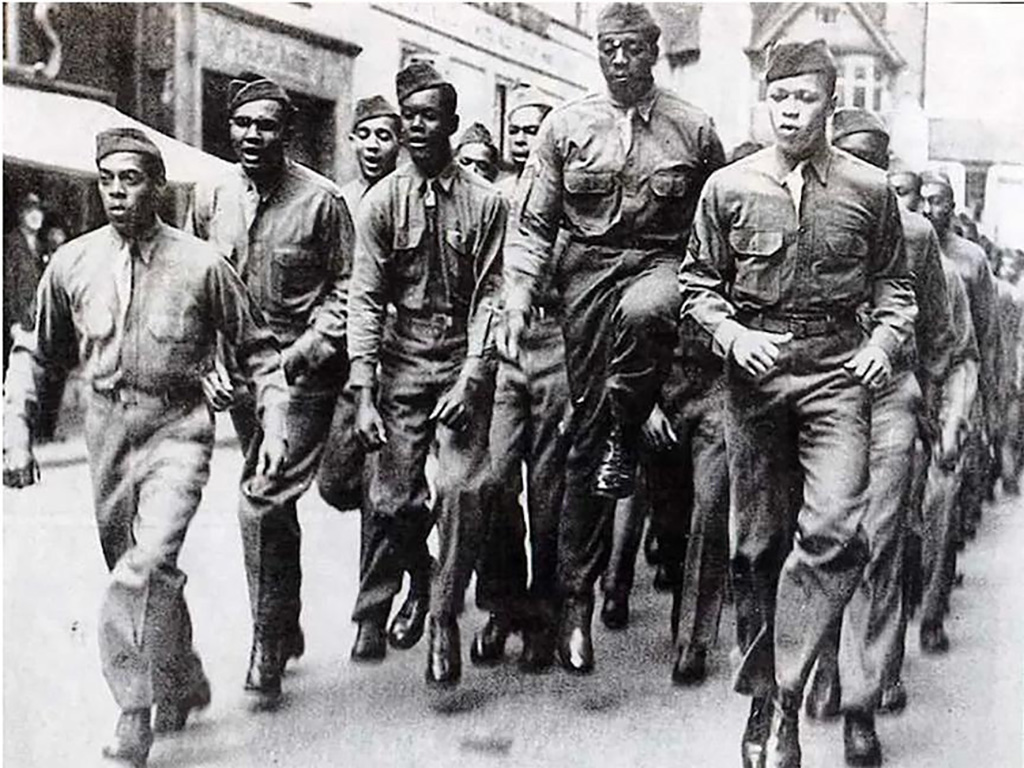 So, what did black soldiers, Marines, sailors, airmen and Coastguardsmen get for all their service and sacrifice? In the words of Frederick Douglass, fighting for our country would help former slaves, “rise up in the dignity of our manhood, and show by our own right arms that we are worthy to be freemen.”

Dr. Martin Luther King Jr. said it best standing before thousands of people on the steps of the Lincoln Memorial on Aug. 28, 1963. Martin talked about a dream. “So even though we face the difficulties of today and tomorrow,” he said, “I still have a dream. It is a dream deeply rooted in the American dream. I have a dream that one day this nation will rise up and live out the true meaning of its creed: We hold these truths to be self-evident, that all men are created equal.”

On Aug. 16, 1967, seven months before his assassination, in a speech “Where do we go from here,” given to the Southern Christian Leadership Conference in Atlanta, King said, “The arc of the moral universe is long, but it bends toward justice.”

The African Americans who have defended this country in wars large and small, helped bend that arc of the moral universe toward justice and toward their people.

Photo Credit: Black American GIs stationed in Britain during the war, these in Bristol, were given a warm welcome by their hosts but treated harshly by their white US Army comrades. brizzlebornandbred, CC BY-NC-SA and the Conversation