Has a new day dawned in Warner Robins?

November 30, 2021 was an historic day for the city of Warner Robins. LaRhonda Patrick, an African American female was elected mayor of the city. She’s been touted as the first female mayor. She’s not. That honor goes to Henrietta McIntyre who served as interim mayor in 1993 after the mayor, police chief and the police department’s second in command were convicted in a scandal to blackmail a city councilman and political rival of the mayor. Nor is she the first African American mayor. Councilman Clifford Holmes served as Acting Mayor from September 2, 2008, until November 11, 2008, as he sat in for Mayor Donald Walker due to medical issues. 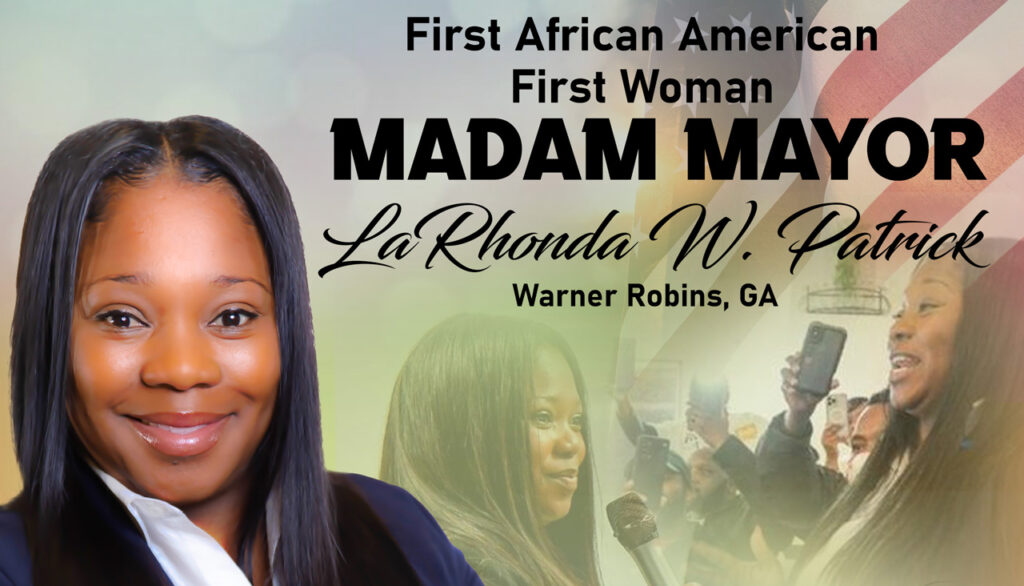 What Mayor-elect Patrick can rightfully claim is that she, as the city’s 18th mayor, is the first elected African American — and female — to lead the International City. Does this signal a political sea change in Warner Robins?

The population of Warner Robins in 2020 was 80,121, made up of 49.66 percent white and 40.23 percent black. The other almost 10 percent of the population is Asian, two or more races, some other race, American Indian and Alaska Native. Adult females lead males in the Warner Robins population mix by almost a full percentage point.

Does that reflect a new political reality? A couple of examples. Daron Lee was elected to the citywide Post 1 seat in 2013. Lee stepped down last year due to family issues and Derek Mack, also an African American, won the seat in a special election in April. In November, Mack was elected to a full term. Councilman Clifford Holmes was first elected to the Post 5 seat in 2006. In 2009, he ran unsuccessfully for mayor. He would, after sitting out a term, recapture the Post 5 seat and was reelected again this year.

But there is danger. For all the flag waving and EDIMGIAFAD (Every Day in Middle Georgia is Armed Forces Appreciation Day) that the city touts, citizens of Warner Robins have a less-than-stellar record when it comes to going to the polls and casting ballots in races for their city government. There are 50,163 registered voters in Warner Robins, but only 8,801 voted in the runoff for mayor on Nov. 30. That’s a paltry 17.54 percent, with Mayor-elect Patrick garnering 51.85 percent to Randy Toms’ 48.15 percent.

Warner Robins citizens, black and white, have to pay more attention to city government — no matter who is running. There is something wrong when 17.54 percent of the people can decide for the other 84.46 percent, and it’s not the fault of the 17.54 percent; they can’t make someone care enough to vote.

Reaching the goal of winning elections is only the beginning. In order to maintain and hold power we must prove that we can govern effectively, maintain integrity and unify the city. Remember the phrase, “Absolute power corrupts absolutely.” While African American do not have absolute power in Warner Robins, there remains a segment of the population that will push back and do everything in their power to make sure Mayor-elect Patrick is a one-term mayor. Our community can make sure that doesn’t happen in 2025 when the mayor’s office will be up for grabs again by exercising our right to vote.