If you are a fan of golf, the highlight of the month of April is The Masters Tournament in Augusta, GA. But if you are a Christian, the highlight of this time of the year is Easter. Easter is the most significant date on the Christian calendar. And what makes this annual day so spectacular is not the Easter Bunny and colorful eggs, but the historical fact of The Resurrection of Christ. Christians all over the world celebrate and “Thank God, He Got Up.”
There is good reason why The Resurrection of Christ is significant to all “believers.” The weight of Christianity is supported by the historical fact that Jesus of Nazareth was crucified on a Roman cross one Friday evening and arose from the grave three days later.

His Resurrection brought clarity to many things He said during His three years of ministry:

Jesus answered them, “Destroy this temple, and I will raise it again in three days.” John 2:19 NIV

The Apostle Paul put it this way:

And because what was foretold in scripture about His birth, death, burial and resurrection has been proven to be true, we have confidence that He has restored our relationship with God. 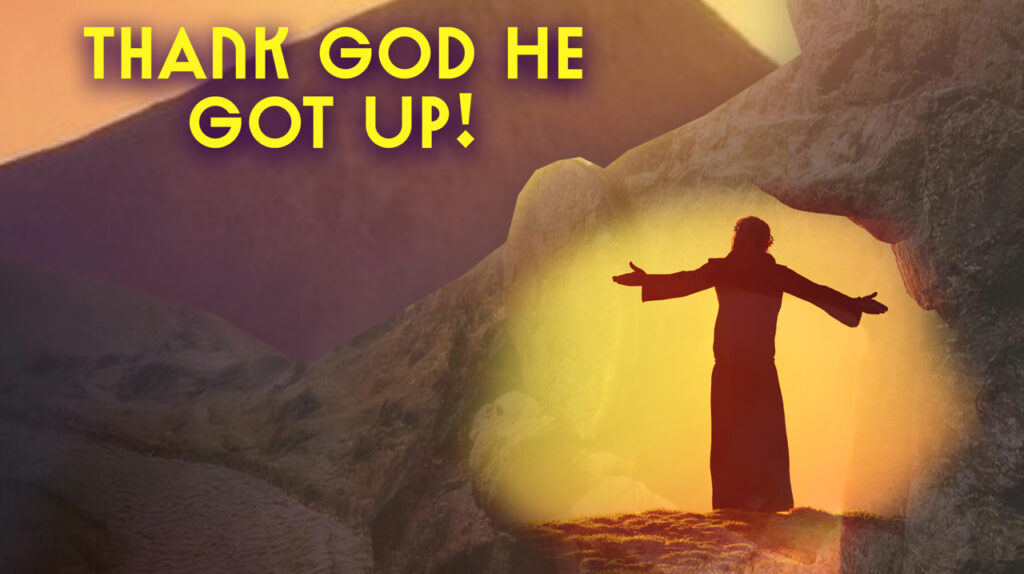 His Resurrection assures the believer of the following:

Justification – He was delivered over to death for our sins and was raised to life for our justification. Rom 4:25 NIV
Salvation – That if you confess with your mouth, “Jesus is Lord,” and believe in your heart that God raised him from the dead, you will be saved. Rom 10:9 NIV

New Life – We were therefore buried with him through baptism into death in order that, just as Christ was raised from the dead through the glory of the Father, we too may live a new life. Rom 6:4 NIV

A Living Hope & Inheritance – Praise be to the God and Father of our Lord Jesus Christ! In his great mercy he has given us new birth into a living hope through the resurrection of Jesus Christ from the dead, and into an inheritance that can never perish, spoil, or fade – kept in heaven for you… I Peter 1:3-4 NIV

His Return – “Do not let your hearts be troubled. You believe in God; believe also in me. My Father’s house has many rooms; if that were not so, would I have told you that I am going there to prepare a place for you? And if I go and prepare a place for you, I will come back and take you to be with me that you also may be where I am.” John 14:1-3 NIV

Mankind is the beneficiary from the resurrection? The late Pastor Chester McCalley, Word of Truth Ministries, said that it settled “The Battle of the Ages.” The battle which began with the fall of man in the Garden of Eden (Gen 3:15). As God had stated, death (spiritual and physical) gripped Adam and Eve and spread from them to all of mankind. Restoration of the severed relationship with God was far beyond man’s ability. But not beyond our Creator, our God who is Omnipotent, Omniscience, and Omnipresent.

It’s easy to see why the celebration of Easter is the most signification date on the Christian calendar. The foundation of Christianity is Christ being raised from the dead.

His birth was necessary, but His Resurrection was essential.