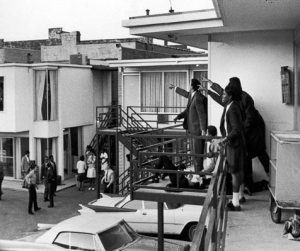 It’s hard to believe 50 years have passed since that fateful Thursday, April 4, 1968. Dr. Martin Luther King Jr., was gunned down that day standing on the balcony of the Lorraine Motel in Memphis, Tennessee. Lyndon Johnson was president and there have been nine other presidents since King’s assassination. One, the nation’s 44th president, was a black man named Barack Obama.

Would there have been an Obama without a King? We’ll never know the answer to that question. We do know that — as King stated — “The arc of the moral universe is long, but it bends toward justice.”

Fifty years is a long time. I was in high school finishing up my junior year. I knew little about King or segregation or Jim Crow. Those realities of everyday life in the South were not part of my existence in California where my classmates were a rainbow of colors and languages.I wasn’t totally clueless. My family’s roots were and are in Arkansas and my mother told me stories about the South. It was a place I never wanted to visit, much less live.The realities of race have changed since Pastor Vernon Johns upset the sensibilities of the white community and those of his congregation in Montgomery, Alabama’s Dexter Avenue Baptist Church, the same church that would call King to preach in 1954. The arc of the moral universe has been ever-bending since Rosa Parks first sat on that Montgomery bus.

But there are other realities, too. Black businesses that supported the community virtually disappeared after integration. Amnesia infected the community as they forgot that the Civil Rights Movement’s first action was not a march, but an economic boycott, that brought the Montgomery Bus Lines to its knees.

On April 3, 1968, the night before he died, King was in Memphis supporting black sanitation workers. He said this to a packed Mason Temple audience: “We don’t have to argue with anybody. We don’t have to curse and go around acting bad with our words. We don’t need any bricks and bottles. We don’t need any Molotov cocktails. We just need to go around to these stores, and to these massive industries in our country, and say, ‘God sent us by here, to say to you that you’re not treating his children right. And we’ve come by here to ask you to make the first item on your agenda fair treatment, where God’s children are concerned. Now, if you are not prepared to do that, we do have an agenda that we must follow. And our agenda calls for withdrawing economic support from you.’

“And so, as a result of this, we are asking you tonight, to go out and tell your neighbors not to buy Coca-Cola in Memphis. Go by and tell them not to buy Sealtest milk. Tell them not to buy — what is the other bread? — Wonder Bread. And what is the other bread company, Jesse (referring to Jesse Jackson)? Tell them not to buy Hart’s bread. … We are choosing these companies because they haven’t been fair in their hiring policies; and we are choosing them because they can begin the process of saying they are going to support the needs and the rights of these men who are on strike. And then they can move on town — downtown and tell Mayor Loeb to do what is right.”

Doing what’s right is not in the vocabulary of some of our nation’s people. It has become acceptable again to exhibit outright racial animus. We have a president who would rather have immigrants from lighter skinned countries come here than from countries he referred to as “sh**hole nations.”

The words of King’s final speech should ring true in our ears as if they were spoken yesterday, not 50 years ago:

“Well, I don’t know what will happen now. We’ve got some difficult days ahead. But it really doesn’t matter with me now, because I’ve been to the mountaintop. And I don’t mind. “Like anybody, I would like to live a long life. Longevity has its place. But I’m not concerned about that now. I just want to do God’s will. And He’s allowed me to go up to the mountain. And I’ve looked over. And I’ve seen the Promised Land. I may not get there with you. But I want you to know tonight, that we, as a people, will get to the Promised Land! And so I’m happy, tonight. I’m not worried about anything. I’m not fearing any man! Mine eyes have seen the glory of the coming of the Lord!”

Less than 24 hours after his Mountaintop speech, King would see his Lord face to face. And I believe he heard the words recorded for us in Matt. 25:21, “Well done my good and faithful servant.”