Christmas ‘Tis the Season to Evangelize

If memory serves me correctly, it was the latter part of October when Brenda asked me what was the subject of my December article. With very little enthusiasm I responded, Christmas. I’m ashamed to admit I wasn’t very excited about writing another Christmas article. My lack of enthusiasm stemmed from the fact that my December article has been about Christmas for the last four years. Duh, Christmas is always celebrated in December. I came to realize I was at a loss for words because felt the need to put a new twist on “the same old story.” Let’s face it, I grew up
in the church and at age sixty-three I’ve heard this two thousand year old story – The Birth of Christ – hundreds of times. And the story never changes. 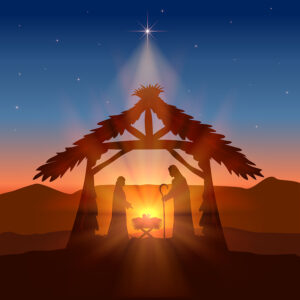 “And in the sixth month the angel Gabriel was sent from God
unto a city of Galilee, named Nazareth,

To a virgin espoused to a man whose name was Joseph, of the
house of David; and the virgin’s name was Mary.
And the angel came in unto her, and said, Hail, thou that art
highly favoured, the Lord is with thee: blessed art thou among
women.

And when she saw him, she was troubled at his saying, and cast
in her mind what manner of salutation this should be.
And the angel said unto her, Fear not, Mary: for thou hast found
favour with God.

And, behold, thou shalt conceive in thy womb, and bring forth a
son, and shalt call his name Jesus.” Luke 1:26-31 KJV

Over the days that pursued, I followed my usual routine – prayed, scribbled notes and asked God for the words. Finally, I heard a couple minutes of a CBS News broadcast that discussed religion in American. The broadcast addressed the findings of a recent Pew Survey regarding religion. I found several recent Pew Surveys online but the one that snared my attention was dated April 25, 2018 and was titled, “When Americans Say They Believe in God, What Do They Mean?” The following paragraphs summarized some of the survey findings:

“A new Pew Research Center survey of more than 4,700 U.S. adults finds that one-third of Americans say they do not believe in the God of the Bible, but that they do believe there is some other higher power or spiritual force in the universe. A slim majority of Americans (56%) say they believe in God ‘as described in the Bible’ and one-in-ten do not believe in any higher power or spiritual force.”

Furthermore, another Pew Survey dated December 12, 2017, titled, Americans Say Religious Aspects of Christmas Are Declining in Public Life, reveals that “… most U.S. adults believe the religious aspects of Christmas are emphasized less now than in the past – even as relatively few Americans are bothered by this trend.”

After reading the findings of those surveys, I regained my enthusiasm for sharing that two thousand year old story – The Birth of Christ. Any and every time of the year is a perfect time for evangelism. But if there is ever a time when Christians should blanket the world with the true story of the birth of The Son of God, it is in December. During the Christmas Season, we have the attention of not only America, but the entire world. And as the surveys point out, “one-third of American adults say they don’t believe in the God described in the Bible and one-in-ten do not believe in any higher power or spiritual force.”

All of this information carried me back to my original problem and revealed what perhaps many Christians face – a reluctance to tell the “same old story.” The positive thing the surveys tell us is that approximately half of the people we meet are candidates to receive Christ. That means the evangelism door is wide open. I believe that God equips us and provides opportunities for us to share the Gospel. We have spent the entire year studying two subjects in bible study – Christianity vs Everybody and Sanctification. December opens the door of opportunity to confidently share our belief.

Another Pew Survey I read reported the following finding: About half of U.S. adults tell us they seldom (33%) or never (16%) talk about religion with people outside their family. And roughly four-in-ten say they seldom (26%) or never (13%) discuss religion even with members of their immediate family.

“Many Americans don’t argue about religion – or even talk about it,” by Alan Cooperman. April 15, 2016

“We have to be bold enough to investigate what other people believe in relationship to what we believe. When we are solid on what we believe, we will not be afraid to see what others believe.” – Pastor Tolan Morgan.

Tis The Season to Evangelize!