Being Thankful Is Not Just A November Thing

Just like a hand and glove, mercy and grace appear together throughout the Bible. Grace is discussed approximately 212 times in scripture and mercy is discussed approximately 273 times. They are almost inseparable. Perhaps because their definitions are polar opposites. Grace means giving me what I don’t deserve and mercy means not giving me what I do deserve. However, that definition needs to be broken down further for clarity. Grace is giving me something good when I deserved something bad. And mercy is withholding giving me something bad when I deserve it. Either way, I receive something good. Grace and mercy is a win/win for all recipients. I am equally thankful to God for both, for both are far
beyond human comprehension. 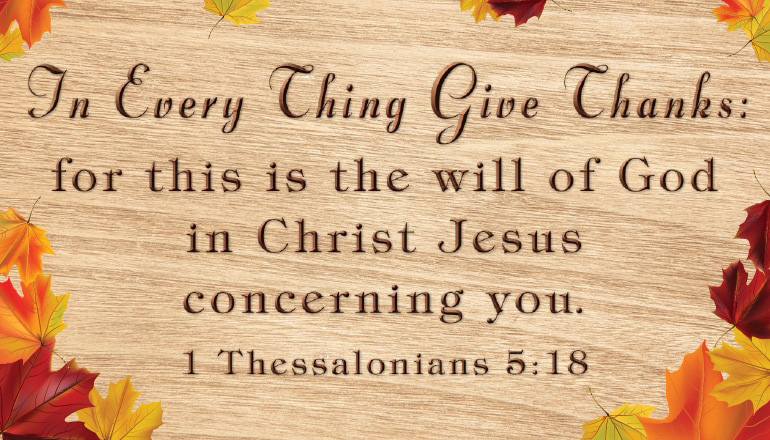 A few weeks ago an earthly example of grace and mercy was exhibited on national television and social media.

On September 6, 2018, Amber Guyger, an off duty Dallas Police Officer, shot and killed an unarmed man – Botham Jean – in his own apartment. The incident immediately garnered national attention. With very few facts being released by the Dallas PD, it appeared to be another incident of an innocent unarmed black man shot by a white police officer. In the weeks that followed, we learned that the shooting of Mr. Jean was the result of a tragic accident. The five-year veteran of the Dallas PD mistook Mr. Jean’s apartment for her own. Returning home from a late shift, she found the door ajar to the mistaken apartment and shot who she thought was an intruder. As the months passed, emphasis shifted from how and why did this happen to, will Mr. Jean’s family receive justice for the death of their innocent loved one? After the shooting, Botham Jean’s mother told NBC News, “I need to look into her eyes and ask her why she did that to my son. She took away my heart, she took away my soul, she took away everything. [He] was in no wrong place at any wrong time. He was in his sanctuary, in the place where he called home. He didn’t deserve this.” (Sept 8, 2018 Blog, Justice Death and Injury Law – Off Duty Cops Kills Man in Case of Mistaken Identity?)

As the words of Mr. Jean’s mother – He didn’t deserve this – resonated across the country, the conversation shifted to, what should the punishment be? But even with that floating on the airwaves of all media platforms, no one anticipated the narrative that played out in the courtroom on the day of sentencing. Before District Judge Tammy Kemp announced the sentence, Mr. Jean’s younger brother, Brandt, was given the opportunity to address Miss Guyger. And while the crowd outside the courtroom demanded justice, Brandt Jean offered forgiveness. “I don’t want anything bad to happen to you.” Then he asked Judge Kemp if he could give the person found guilty of murdering his older brother a hug. He gave her something –
forgiveness – that many believe she doesn’t deserve. But the story doesn’t end there.

Judge Kemp decided not to sentence Miss Guyger to the maximum 20-year prison term. She chose to withhold the maximum – what many outside the courtroom thought was already too lenient – and sentenced her to 10 years in prison. She should be eligible for parole in five years. Judge Kemp ended court that day by also giving Miss Guyger a hug plus a Bible.

Now I ask you to step away from the emotions of this tragedy and think about what God has done for us through Christ. Just like Amber Guyger, we are guilty. And regardless of our situation, circumstance or position, we are still guilty of sin and have no defense.

But over two thousand years ago, God gave us a gift we didn’t deserve. For God so loved the world that he gave his one and only Son, that whoever believes in him shall not perish but have eternal life. John 3:16. And the amazing thing about this gift is it was given to us while we were in our sinful state. But God commendeth his love toward us, in that, while we were yet sinners, Christ died for us. Rom 5:8 KJV. God gave us something we didn’t deserve, but He didn’t stop there. Each day He withholds from us what we truly deserve. It is of the LORD’S mercies that we are not consumed, because his compassions fail not. They are new every morning: great is thy faithfulness. Lam 3:22-23 KJV. On a daily basis, God withholds that which we truly deserve. We would he consumed/destroyed if He didn’t.

Even the un-saved are recipients of His grace and mercy. He does not want anyone to perish. The Lord is not slack concerning His promise, as some men count slackness; but is longsuffering to us-ward, not willing that any should perish, but that all should come to repentance. 2 Peter 3:9 KJV. He is withholding judgement in order to give everyone an opportunity to accept the Gift we don’t deserve – His Son, Jesus Christ.

I thank God for giving me that which I do not deserve and I am equally thankful that He withholds that which I do deserve. Only He who is Omnipotent, Omniscience and Omnipresent has the ability to not only make those kind of decisions correctly, but also make them work out for my good. And we know that all things work together for good to them that love God, to them who are the called according to his purpose. Rom 8:28. KJV – Henry Hopson, Jr.

The month of November, with the holiday of Thanksgiving coming during its last week, is a time when most of us focus on being thankful, but according to Paul’s letter to the Thessalonians, we should be thankful in everything — and I would suppose that to mean — every day, not just Thanksgiving Day.

Certainly, we have a lot to be thankful for. Although we take for granted our waking up and lying down, approximately 152,000 people around the world never wakes to a new sunrise. In the United States, a person dies every 12 seconds.

Granted, many of us have challenges — health, financial, relationships — our lives are not perfect, but we must admit, even in our worse of times, our attitude toward those challenges — and our faith in God’s strength — rather than our own — pulls us through.

What can we do differently going into this season of thanksgiving? First, we can recognize all of the little blessings received each day. There’s an old phrase, “Stop and smell the roses.” Sometimes we get so caught up running here and there that we let life’s little blessings fast forward past us. We don’t hit pause long enough to look around and feel God’s Holy Spirit working in our lives.

I also believe we, at times, have been spoiled. We have such an abundance that we allow little interruptions to kick us off our path to being thankful. Petty jealousies pop up and we dwell on what we don’t have instead of the multitude of things we do have. We don’t think about the protective hedge God has placed around us while we wonder why others seem to be blessed more — even folks we deem too wicked. Our walk of faith is not to wonder why someone else is being blessed, but to recognize our own wealth of blessings and give thanks, because that is God’s will.

Here’s a short list of what I’m thankful for as I sit here at my computer writing this message for the November issue of the Navigator. It is not an all encompassing list, I don’t have that much space.

I could go on and on but you get the idea. I’m even thankful for folks who don’t care for me, because they make me stronger.

As you start your own list there is no need to stress out, because any list of what you’re thankful for will be long, just follow the admonition of 1 Thessalonians 5:18: “In everything give thanks.”