My parents were very simple people. Don’t quote me on this, but their formal education did not go beyond the second or third grade. As bad as that sounds, that wasn’t uncommon for Negro children growing up in the Deep South during the 1930’s. And I strongly disagree with today’s experts who would label them as uneducated. Dad was a welder, builder, electrician, plumber, mechanic, farmer, deacon and a great father. Mom was a maid, homemaker, chef, gardener, doctor, educator, caregiver, and a great mother to six children. I think that’s a pretty good resume for two “uneducated” Negro parents growing up in the corner of Southwest Georgia. 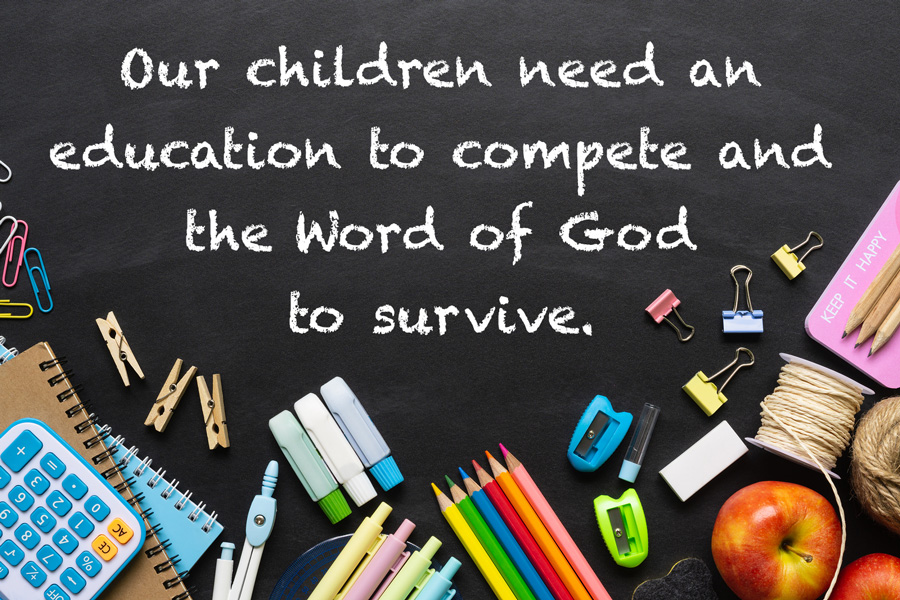 My sisters and I were blessed because somewhere in their unscripted and “uneducated” life, our parents gained a Christian education and passed it on to us. The limitations of their lack of a “formal” education plus the racial divide of that era didn’t prevent them from giving us the best they had and supplying us with what we needed for a successful future. Somewhere along the way, they found a track to run on – The Word of God. Growing up as kids, our family and our future didn’t depend on what we had or didn’t have. It depended upon having an intimate relationship with God and a foundation based on the belief in His Word. That’s the same thing Brenda and I have passed along to our children.

Beloved, as our children end their summer vacation and are ushered back to school – Kindergarten, Elementary School, High School, College, Military or the School of Life – don’t forget to pack a note book, pencils, paper and the Word of God in their book bag. Their ability to successfully compete in today’s job market does require the best “formal” education money can buy – in conjunction with the best education money cannot buy – a Christian Education.

My “formal” education didn’t rescue me when “my cow jumped over the moon, humpty dumpty fell off the wall, and Jack fell down the hill.” It was the foundation of the Christian Education provided by two “uneducated parents” and the leaders of The Oak City and Macedonia Missionary Baptist Church that stood up when I was down. That track to run on led me to “The Ship.”

We are studying the book of Revelation in our Christian Enrichment class. Revelation tells us what happens during the last seven years of human history. The end comes like a thief in the night. But there will be signs indicating the end is near. As human government continues to deteriorate, society will begin to embrace everything opposite of the Word of God as normal. As I listen to and read the daily news briefs, it’s easy to see there is a “new normal” on the horizon.

We as parents, Christian parents, have an obligation to prepare our children for what lies ahead. The future can and will be a great place to be. But only for those who have an intimate relationship with God and a foundation based on a belief in His Word. The same thing my parents gave me and my sisters to carry into the future is the same thing our children need to today – notebook, pencils, paper, the Word of God.