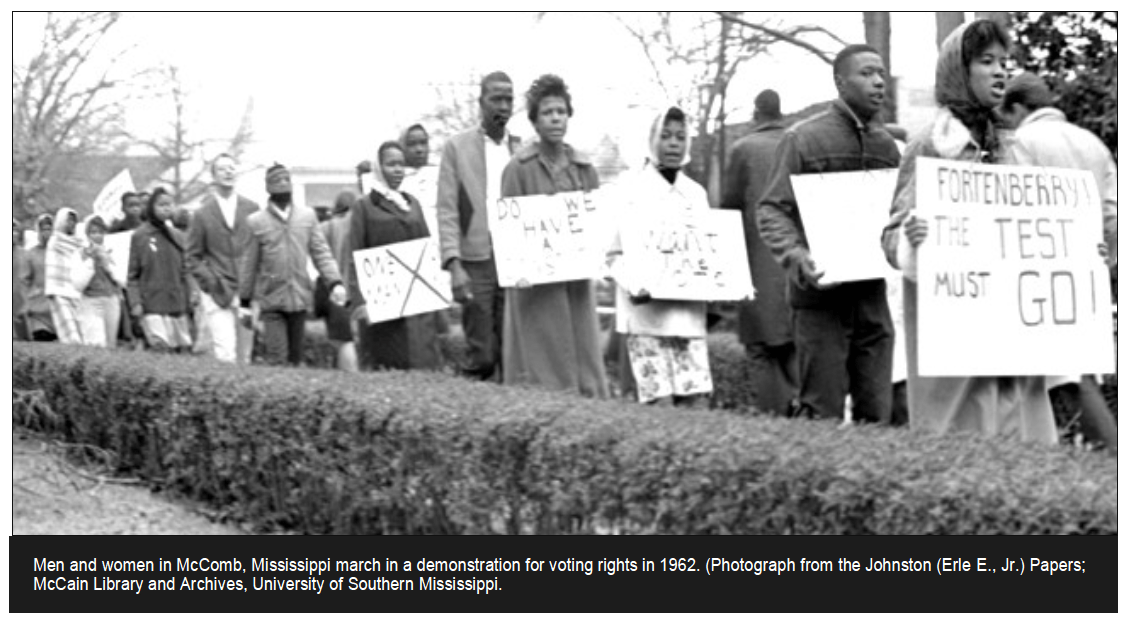 Voting should be one of our most cherished rights. It literally took blood, sweat and tears with an emphasis on blood. The vote did not come easy for African Americans, but it is a right too many just ignore. Following the Civil War there was a brief bright spot during Reconstruction when more than 2,000 blacks were elected to office on the local, state and national levels with Hiram Revels and Blanche Bruce serving in the U.S. Senate and 16 serving in the U.S. House of Representatives. However, that moment was brief. At every turn, there have been concentrated efforts to take the power of the vote away from blacks. And those efforts continue today. First, a little voting history. The effort to keep blacks in their place began almost immediately after the Civil War. The Ku Klux Klan was organized in 1866, and at the time, Republicans were the ones pushing for equal rights for blacks and Southern whites were having none of it. However, there was not much they could do to stop it. Federal troops occupied the South. This, as you can imagine, didn’t go over well with the white power structure. The Ku Klux Klan became active to push against that tide. The Klan and other terrorist groups murdered at least 35 black elected officials, according to history.com. When President Abraham Lincoln was assassinated, his vice president was Andrew Johnson. He was a south-erner from Tennessee who remained loyal to the Union. However, if you look at his actions, he was a segrega-tionist at heart. Johnson: (1) Restored Southern states to the Union. (2) Granted amnesty to former Confeder-ates. (3) Allowed states that seceded to elect new governments that would include ex-Confederate officials. Those legislatures enacted black codes to re-oppress former slaves. (4) He vetoed the Freedmen’s Bureau bill and the Civil Rights bill. Both would have protected blacks. (5) When Congress passed the 14th Amendment granting citizenship to blacks; Johnson urged Southern states not to ratify it. His efforts were unsuccessful; it was ratified anyway in 1868. Ulysses S. Grant would follow Johnson into the White House and he would lead the effort to cut Klan violence in the South, but times quickly change. By 1876, the South was under control of Democrats. Although President Rutherford B, Hayes believed in Reconstruction, the House now controlled by Democrats, refused to fund federal garrisons in the South and they even attempted to wipe out any protections for the rights of blacks to vote. While the right was preserved, the ability to enforce it disappeared. Thus his presidency marked the end of Reconstruc-tion — and without federal protection, the right to vote and other rights were taken away. Between 1890 and 1910, 10 of the 11 former Confederate states passed new constitutions or amendments that effectively disenfranchised most blacks and tens of thousands of poor whites through a combination of poll taxes, literacy and comprehension tests, and residency and record-keeping requirements. In Louisiana, by 1900, black voters were reduced to 5,320 on the rolls, although they comprised the majority of the state’s population. By 1910, only 730 blacks were registered, less than 0.5 percent of eligible black men. In 27 of the state’s 60 parishes, not a single black voter was registered. In North Carolina, black voters were com-pletely eliminated from voter rolls from 1896–1904. In the May edition of The Navigator, we will look at modern history and explain why it is so important for African Americans to vote in every election, particularly the elections in May and November 2016.